The Franklin County Federation of Fish and Game Clubs 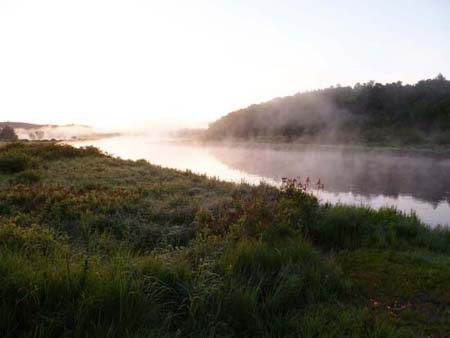 The Saranac Lake Fish and Game Club is an active member of the Federation. Other members are Malone Fish & Game Club, Tupper Lake Fish & Game Club, Alexander McDonald Fish & Game Club (St Regis Falls), Chataguay Fish & Game Club and American Legion Fish & Game Club. The ogranization has been active since the early 1970S and meets each month on the 3rd Tuesday of the month except for their annual meeting which meets on a Friday in the month of September. The meetings are at various locations announced at the previous meeting. Locations are Paul Smith College, Deer Valley (Santa Clara), and Hoslers Restaurant in Malone. Dinner is at 6pm and the meeting is at 7pm. In the summer meetings are hosted by various clubs so that club members may attend and the delegates can see the various club houses. Clubs may send as many members to a meeting as they want but each club has a maximum of three votes at a meeting. Each club pays annual dues.

The Federation has a paid membership in the New York State Conservation Council. Each county federation has an official delegate and alternate delegate to the this state-wide sportsman's organization. Several of our members sit on state wide committees of the state organization. Currently we have members on the Legislative Committee, Archery Committee, Fish Committee, Firearms Committee and the Small Game Committee who all represent region 5. Region 5 has a regional director who attends NYSCC board meetings throughout the year.

The NYSCC has a seat on CFAB (Conservation fund Advisory Board) and Region 5 also has a representative on that board.

The Federation meetings usually have a representative from region 5 DEC in attendance to pass back and forth information. Sometimes it is a conservation officer and some times it is a member of the fish or wildlife office. We also have, in addition to the usual officers of any organization, a Legislative Vice President that acts as it's spokesman to the Regional DEC headquarters to communicate and facilitate cooperative agreements with the local office on a variety of matters of concern for the Federation. The Federation acts as the representative of the organized sportsmen of Franklin County to the county government and receives some funding from the Franklin county Legislature.

The Franklin County Federation of Fish and Game Clubs maintains a sportsman's building at the Franklin County Fair in Malone each year. Every Club is obligated to set up a display in the building and to man the building for two days of the fair. This requires a display to be constructed prior to the opening of the Fair and a taken down after the Fair. It also requires four club members for each of the two days. The first shift of two club members supervises from about 10am to 4pm and a second shift supervised from 4pm until about 9pm. You also make money for the federation buy selling tickets and signing-up kids to win a free fishing pole and reel combo. The Fair is important to the Federation as a way to engage the citizens of the County by relaying information about organization sportsman's activities in the County such as fish stocking, hunting & trapping education courses, land master plans, sponsored kids fishing tournaments etc. In recent years we have built a handicapped fishing access site, purchased a mechanical deer for DEC to catch poachers in the county.

Through the NYSCC and the Franklin Federation our Fish and Game club is able to provide and receive county, regional, and statewide input and feedback so that our members are represented at all levels in regard to issues so that we can be informed and act on most any concern or topic and be proactive. We encourage our members to attend federation meetings to learn more.