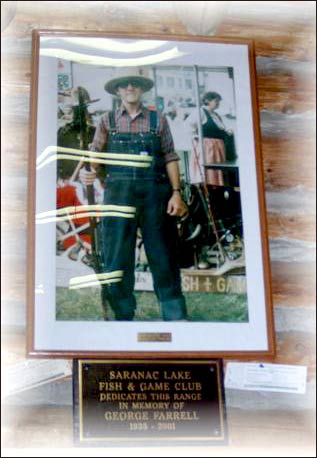 They met under lantern light and sat on empty beer or soda cases and formed the Club. The morning following the meeting, the men planted whitefish in Lonesome Pond. Those planting the fish were William Melvin, William Stearns and Al Bernard. Melvin fell in the pond and the others had to pull him out!

For a year the Club met in the back room of John Hogan's Drugstore which later became Charlie Green's Grocery. It was voted that first night that the dues would be 10 cents for the first year and one dollar per year thereafter!! The first President was John Morgan and it was agreed to meet the first Thursday of each month, which we are still doing today.

Meetings were held in numerous places including Gladd's Camp in Franklin Falls until the present property was acquired in 1928. The range room and kitchen additions were completed in 1948 just in time to serve as a schoolhouse for a few months when the Old Colby School burned to the ground.

On May 4, 1947 the Adirondack Conservation Council was organized at our Clubhouse and its first president was Ed Worthington. After World War II, skeet shooting became popular and the Club was the site of many international meets. Throughout the years the club has represented the interests of the organized sportsmen and sportswomen of the Saranac Lake area, on a local, state and national level.